Researchers in Japan and the United States conducted a study showing that Tokyo residents may have developed herd immunity to Severe Acute Respiratory Syndrome Coronavirus 2 (SARS-CoV-2) during the summer.

SARS-CoV-2 is the viral agent responsible for the current 2019 coronavirus disease (COVID-19) pandemic, which continues to sweep the globe and pose a significant threat to human health.

Yasutaka Hayashida (Medical Corporation Koshikai, Tokyo) and colleagues at Boston Children’s Hospital and Beth Israel Deaconess Medical School, Boston, say their study suggests that the seroprevalence for SARS-CoV-2 is close to 50% at around the same time Cases of COVID has risen. 19 disappeared in the city.

“With the increase in SPR [seropositivity rate] Nearly 50% within our cohort, by the time COVID-19 cases wore off, the possibility of herd immunity should be considered, especially in the high-density urban scenario like Tokyo, ”the team writes. 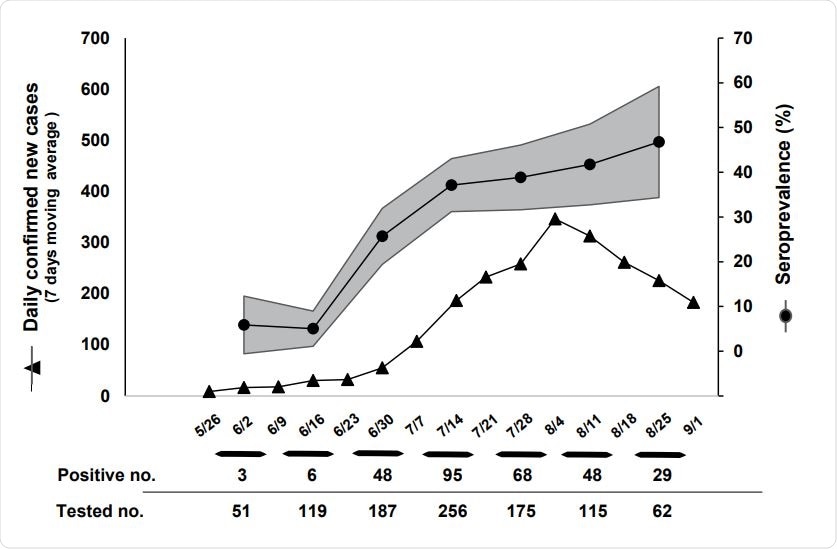 The death rate in Japan fell despite the lack of lockdown

Compared to the US and European countries, COVID-19-related mortality has been low in Japan and the death rate has decreased despite the lack of lockdown.

The reasons for the low death rate are not yet known. They may be related to a low SARS-CoV-2 prevalence in the general population or a reduced death rate in infected cases.

“Serologic tests monitored over the course of the second wave can provide insights into population-level prevalence and dynamic patterns of COVID-19 infection,” the team writes.

What did the current study include?

To assess the seropositivity of SARS-CoV-2 during the summer, the team hired 1,877 healthy, asymptomatic employees from a large company at 11 different locations in Tokyo.

Weekly serological tests for SARS-CoV-2-specific immunoglobulin G (IgG) and IgM antibodies were carried out company-wide between May 26 and August 25, 2020. This time window included the well-documented “second wave” of COVID-19 that happened in Japan.

To assess seroconversion and seroreversion in the general population in Tokyo over time, the tests were offered to each participant twice, approximately one month apart.

The seropositivity rate was calculated by pooling data from each two-week window across the cohort. Changes in immunological status to SARS-CoV-2 were determined by comparing the results between two test results from the same participant.

Seropositivity increased dramatically in the summer

The seropositivity rate rose from 5.8% at the beginning of the study to an unexpectedly high 46.8% by the end of summer.

“A high rate of seropositivity in Tokyo may not be entirely unexpected given its remarkably high population density, close spacing, widespread use of public transportation, and no implementation of a lockdown,” say Hayashida and colleagues.

“Seroreversion was not uncommon, and was seen in 12% of participants for a month between tests,” the team says. “This suggests that serological tests can significantly underestimate previous COVID-19 infections, especially when applied to an asymptomatic population.”

The results can be transferred to the wider metropolitan area

The researchers say that while the study cohort was not selected from a broader, random sample of the Tokyo population, the results can be generalized to the greater metropolitan area for a number of reasons, including the many different locations the participants came from and the limited they had physical contact with each other.

In addition, the exclusion of symptomatic individuals could possibly have led to an underestimation of the overall seropositivity rate.

The possibility of herd immunity should be considered

“The COVID-19 infection may have spread across the entire population of Tokyo, despite the very low death rate,” say Hayashida and his team.

Although Japan took the atypical step of not introducing a mandatory lockdown, the second wave peaked and yet subsided, they add.

“Given the temporal correlation between increases in seropositivity and the decrease in reported COVID-19 cases that occurred without shutdown, herd immunity may play a role,” the researchers suggest.

“Future studies may consider assessing whether lifestyle / habits, strain of virus, widespread use of masks, or host factors such as immunological memory are responsible for the low death rate observed,” they conclude.

Is Practising Yoga Whereas Menstruating Secure?