Researchers in the UK and US have reported results showing that patients who recovered from Coronavirus Disease 2019 (COVID-19) had significant cognitive deficits.

The study, which is based on cognitive test data from more than 84,000 participants, identified the deficits not only in people with severe illness, but also in those with mild illness who had not even reported difficulty breathing.

The application of generalized linear modeling (GLM) showed that the observed deficits could not be explained by differences in age, education, underlying illnesses or other demographic and socio-economic variables.

“Our analyzes provide converging evidence to support the hypothesis that COVID-19 infection is likely to have cognitive function ramifications that persist well into the recovery phase,” said Adam Hampshire (Imperial College London) and colleagues at the University of Southampton, University of Cambridge, University of Chicago and King’s College London.

“These results should serve as an invitation to clarify more detailed studies that investigate the basis of cognitive deficits in people who have survived SARS-COV-2 infection.” 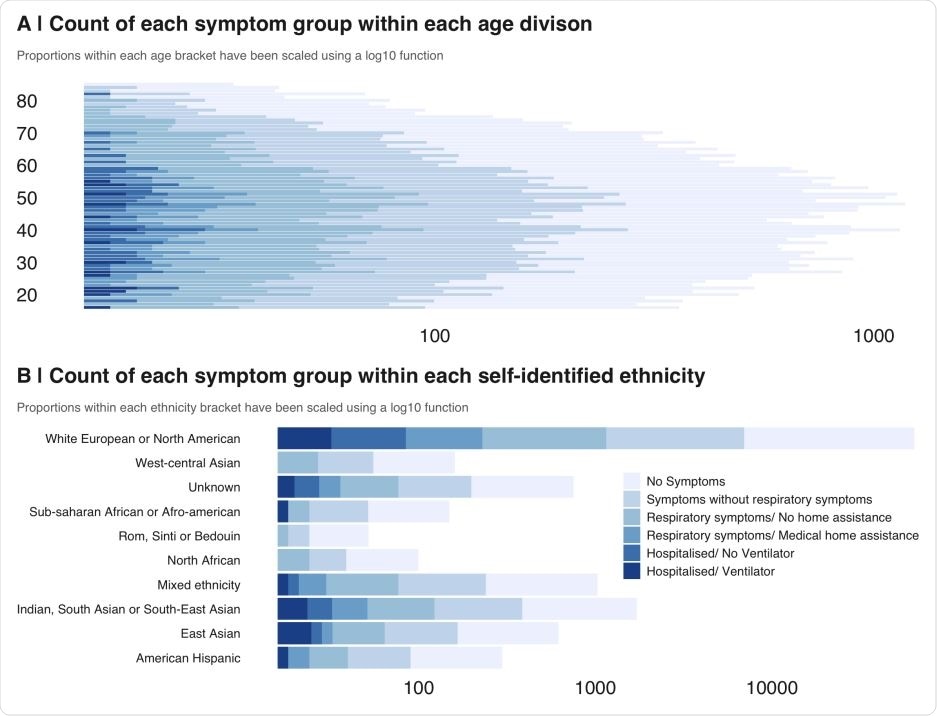 The distribution of people who said they had recovered from COVID-19 broke down according to the treatment they received for respiratory problems. Note the broad and balanced age distribution for all subgroups. B | People from a wide range of self-identified ethnic groups took part in this study.

The evidence so far

A growing body of evidence suggests that people who develop severe COVID-19 may develop neurological problems, such as: B. Stroke, microbleeding and inflammatory syndrome. Some studies have also reported increased autoantibody levels in patients’ cerebrospinal fluid, changes in white matter in the brain, and psychological consequences at the time of discharge from hospital.

However, little information is available on whether COVID-19 is associated with cognitive impairment at the post-infection population level or across varying degrees of severity.

“Measuring such associations is challenging. Collecting cognitive data lengthways from before to after COVID is extremely problematic because the infection is unpredictable,” said Hampshire and colleagues. “It is also important to include important minority subpopulations, such as older adults, racial-ethnic groups, and people with pre-existing medical conditions.”

Researchers performed a large-scale cross-sectional analysis of recovered COVID-19 patients and healthy controls, adjusted for potential confounders such as age, education, underlying medical conditions, or other demographic and socio-economic variables.

The team analyzed cognitive test data available on 84,285 people who took the Great British Intelligence Test and completed a questionnaire on suspicious and biologically confirmed COVID-19.

“Because of the high visibility of the study, this cohort spanned a broad age and demographic range,” said Hampshire and colleagues.

The researchers also wanted to find out whether the extent or type of deficit was related to the severity of the respiratory symptoms, as measured by the level of medical assistance required.

“Individuals who have recovered from suspected or confirmed COVID-19 perform worse on cognitive tests in several areas than expected based on their detailed age and demographic profile,” the team writes.

The deficits were substantial even in not severe cases

The effect size was significant not only in those who needed hospitalization, but also in those who did not need hospital treatment and did not even report breathing difficulties.

Hospital cases showed large to medium global performance deficits, depending on whether or not they needed a ventilator.

“For comparison: In a classic intelligence test, 0.57 SDs correspond to a difference of 8.5 points in IQ,” said Hampshire and team.

Those who did not need hospital support and stayed at home showed small but statistically significant global performance deficits that scaled with the severity of the respiratory symptoms.

The deficits ranged from -0.12 SDs in 176 people who received home support for breathing difficulties. to -0.10 SDs among 3,466 who had difficulty breathing but no medical assistance; to -0.04 SDs among 9,201 who were sick but had no breathing problems.

A finer-grain analysis of the deficits showed that they were broad and affected multiple cognitive domains.

However, they were more pronounced for semantic problem solving and visually selective attention than for simpler functions such as working memory span and emotional processing.

“People who have recovered from COVID-19 infection show particularly pronounced problems in several aspects of higher cognitive or ‘executive’ function,” the team says.

The researchers say this finding is consistent with preliminary reports of executive dysfunction in some patients at the time of hospital discharge, as well as previous studies in ventilated patients with acute respiratory distress syndrome prior to the pandemic.

A “broader understanding” of the deficits is required

“Our analysis of detailed cognitive ratings and questionnaire data from tens of thousands of data sets collected in collaboration with BBC2 Horizon agrees with the view that COVID-19 has chronic cognitive consequences,” said Hampshire and colleagues.

“A deeper understanding of the pronounced deficits our study shows will enable better preparation for the post-pandemic challenges,” the team concludes.