The infectious nature of the severe acute respiratory coronavirus 2 (SARS-CoV-2) has resulted in three strong waves of the pandemic spreading through the populations of different countries.

With the 2019 coronavirus (COVID-19) pandemic disproportionately affecting the elderly, the belief is that children can transmit the virus from school to their grandparents, who have a higher death rate if they acquire this virus. For these reasons and for prevention purposes, schools were advised to close.

Now, in the absence of solid evidence, a group of researchers from India have investigated this concept and conducted a community and population-based sero-surveillance study for coronavirus infection under the umbrella of the World Health Organization (WHO) Unity. In this study, participants older than two years were compared to older adults for seropositivity.

This research was carried out in five areas in India: New Delhi; Bhubaneswar, Odisha; Gorakhpur, Uttar Pradesh; Puducherry; Agartala, Tripura, and consisted of both the urban and rural areas within these sites. 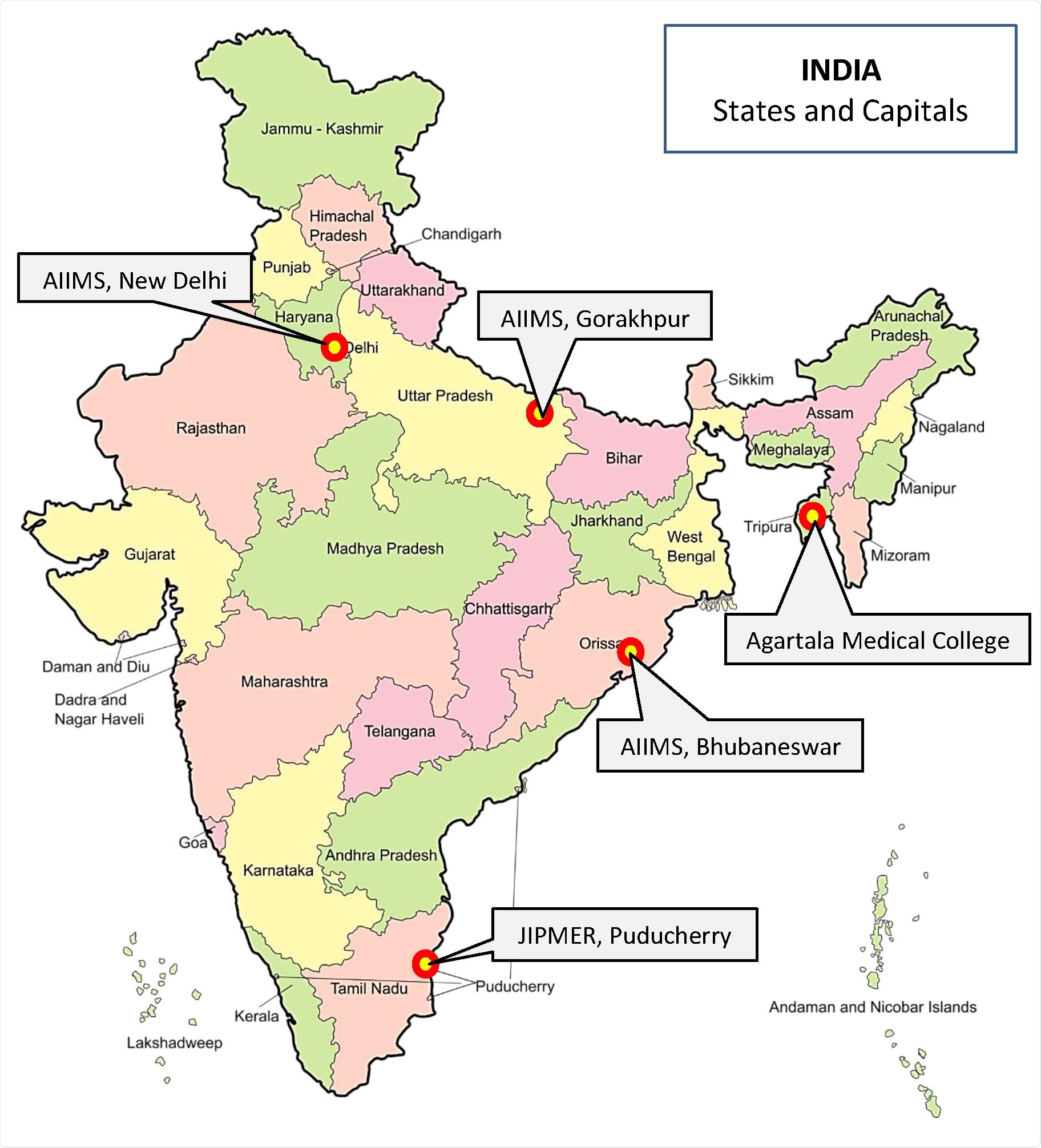 The geographical location of the study locations in India

The reported data covered an age range from 2 to 17 years, which were collected in different time periods for the different locations from March 15 to June 1. Participants’ serum antibody reactivity to SARS-CoV-2 was the primary variable measured using the Enzyme-Linked Immunosorbent Assay (ELISA) to determine total serum antibody levels.

The results of the study were that children had a slightly lower seropositivity rate than adults, with the seropositivity rate for children being 55.7% compared to adults at 63.5%. This supports the previous literature and the conclusion that children are less affected by the virus than adults, but even this lack of informative value could indicate that susceptibility is similar in the two age groups.

Researchers are exploring the limits of measuring susceptibility to infection and discussing that when schools are closed, children are only exposed to infection from adults who leave home for work, food, or other important travel.

In addition, the scientists mention the lack of clarity as to whether children are able to produce the same amount of antibodies as adults. If their production levels are lower, it can be difficult to identify and prove through existing laboratory tests.

This theory would affect the outcome of this hypothesis as it would affect whether children are less, the same, or more susceptible to the virus than adults, and the lack of sensitivity of current laboratory tests may result in children’s antibody levels not being effectively detected .

Other limitations and strengths that have also been explored by the researchers of this pre-print paper include the sampling technique and the representation of the population.

Due to the five locations and 25 different clusters included in this study, different geographic locations within India have been covered, which helps ensure that the study and the associated results are representative of the population.

However, the sampling method used was cluster sampling and this included selecting a location in New Delhi that consisted of a large population of people of low socioeconomic status, which may make the results of that location less representative of the city than Whole.

This study aimed to explore the concept of susceptibility in different age groups (2-17 years old), with the theory that children are less susceptible to the SARS-CoV-2 virus compared to their older counterparts.

Research conducted by the scientists, which overlooked results from five different locations in India, found that the seropositivity rate in children was still high and may be comparable to the rates in adults.

The researchers conclude that children have a high SARS-CoV-2 seropositivity rate that is comparable to adults. It is therefore unlikely that a future third wave would disproportionately affect children from the age of two due to the prevailing SARS-CoV-2 variants.

medrxiv publishes preliminary scientific reports that are not peer reviewed and therefore are not considered conclusive, guide clinical practice / health-related behavior, or should be treated as established information.

Shedding Weight Helped Heal Not Simply My Physique, However My Thoughts and Spirit, Too